skip to main | skip to sidebar

I Interview THE DELTA BELL About Getting Wasted On Heartache And Tears, And Her Favorite Color. 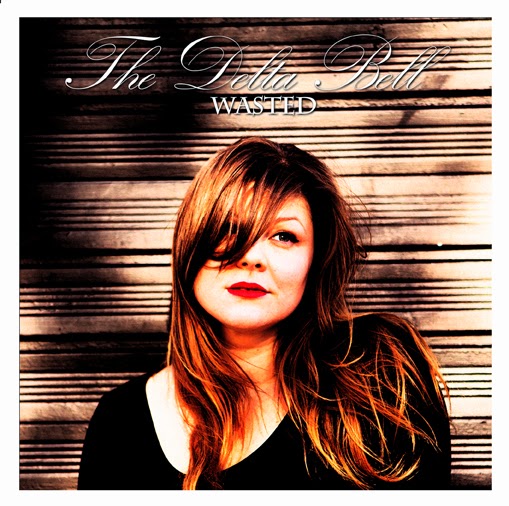 The Delta Bell is the AKA of Kate Gerrard, a Norfolkman living in Brighton, England. She has an excellent new single out called Wasted b/w The Back Of Your Mind (RandomActsOfVinyl 7") that I was turned on to by the records producer Paul Pascoe of the bands Mudlow and Fire Eyes.

It's a refreshing sound, both country and not, British and not, but literate and well-crafted all around. I think it's fantastic. I wanted to find out more so Kate consented to an interview via Facebook message:

Rick Saunders (RS) :: You've got a cool voice for...country music? I want to call it country but is it? Listeners can decide, but would you agree that what you do is at least a hybrid of country music? I hate to say alt-country, as that seems a dead or unnecessary sub-genre now. Your music, filtered by an english voice, makes your sound instantly familiar, a sweet nostalgic twinge and whisper of old-timey music. I don't want to suggest that you play english country or old-timey music in the strict sense, but there seems to be a strong element of that.

Kate Gerrard (KG) :: Yes definitely, I love country music, mostly 60s/70s artists like Flying Burrito Brothers, Skeeter Davis, Townes Van Zandt, CCR. I love the honesty of country music, and that songwriting as an art is at the centre of it. That's how I write songs. Country's such a wide genre that one person's country might be very different from another's. When I talk about country, I mean those great songwriters who were singing and playing from the heart.


(RS) Agreed. There's a level of poetry in so much of the older stuff, and that's hard to come by these days. So much of country music, the horror that is pop-country, is that it's a bumpersticker slogan for a corporate beer commercial faux party.  On the other hand, one of the things I like about your work is the thoughtfulness of the lyrics and the music. How long have you been playing, and have you been in other bands?

(KG) Thanks. I take a lot of care with all the aspects of my music – arrangements, lyrics, through to photos and artwork. To me, it’s all art and deserves time and thought and consideration. I’ve been playing music since I was a kid, and I started on the guitar when I was about 13, so I’ve been playing for nearly 20 years. I started writing songs about then too. I’ve been in various bands over the last ten years or so, tried to get various things started. But I got to the point a couple of years ago when that got a bit frustrating, so I decided just to record my songs, and I got people to come and play on them – drums, pedal steel, strings, backing vocals, flugelhorn. I’m lucky to be in Brighton where there are a lot of great musicians around. I like the freedom of doing it like that, you don’t feel compelled to include an instrument just because you’ve got someone in your band who plays it. That being said, since recording the album I now have a five piece band – including Andrew Blake, who played the pedal steel on Wasted - and they're all great musicians, so I’m looking forward to bringing the songs to life, and I think future recordings will have more of a band feel.

(RS) The care you've taken in your presentation via the videos and graphics for the single, the overall sound of the production, plus the fact that you didn't just dump an album on the world all at once...it shows care, and thoughtfulness...and style.
I'm delighted to hear you say that you look at all of it as art. I have the same view. In this day and age you either craft it carefully or get ignored. Of course you can still be well-crafted and get ignored but...
I want to ask you about the album Bow Out Of The Fading Light but first I want to ask you about the single you did for the wonderful Random Acts Of Vinyl label. I've loved all the stuff I've heard from that label, particularly the single by your friends Paul Pascoe of Mudlow and his friend the great Sally Megee, And of course the Mudlow single. How'd that come about?


(KG) Yeah and I really enjoy crafting it, and thinking it through. And there’s no imperative to do things quickly, I’d rather let something come to fruition when it’s ready. Although that’s not to say it doesn't get frustrating now and again! Ah the wonderful Random Acts Of Vinyl! They’ve got/are some great bands – Palm Springs, Fire Eyes, Beat Hotel. I think the upcoming Fire Eyes single will be their 15th release, so they’ve got a good back catalogue too. My involvement came about because Davey (Pinnington, who runs the label with Jon Russo) saw my previous band at a night he was co-running at the time. He liked it and wanted to do a release. That was about two years ago, just when I’d started this set of recordings, and the band I was in was coming to an end, so it ended up being what became The Delta Bell. Davey and Jon have both been really supportive and encouraging. It was Davey who suggested doing the mixing and mastering with Paul Pascoe, which I’m so glad I did – he just got what I was doing, and took the extra time to master the songs onto tape which just gave it that extra warmth and magic. It feels very communal, and we’re all involved in each other’s music somehow – the great Sally Megee sang on one of my songs, I ended up playing piano for Palm Springs and doing some background vocals, that kind of thing. It shouldn’t be underestimated how fun it is doing it that way, there are a lot of good times in the RAOV world!

(RS) Paul has some great ears and taste to match, doesn't he? If I could afford to record my band by anyone he'd top my list.
Tell me about the name, The Delta Bell.

(KG) I was at a photography exhibition in London, and there were some photographs by William Eggleston. I love his work, it totally draws me in. There were a couple of photos next to each other, one was of a car in front of a food stall, and the sign said Delta Kreme. I liked the sound of Delta Kreme, but not wanting to sound like a donut vendor, I wrote some other words down. The next photo along had the ‘something bell’ on it -  I can’t remember what exactly – so one of the ones I wrote was The Delta Bell. I still liked it a few weeks later so I kept it.


(KG) I don’t have a release date yet, but I think it will be early next year, and there might be another single before then on RAOV. I’ve only released one single so I’m at the very early stages of getting stuff out there so I’ll see how it goes. RAOV are keen to put the album out but as always it depends on finances, and they're supportive of me seeing if there are any other interested labels so we'll see how it goes. It will be out somehow early next year, mainly so I can get on with the next one!
I’m not really sure where the album title came from, it’s just one of those phrases that I had knocking about in a notebook and it seemed to fit that collection of songs. I guess when I thought of it, it was at a time when there were a lot of changes in my life, so to me it’s kind of like closing the door on the past, not in a traumatic way, but just stepping aside from it all and starting anew. Kind of laying ghosts to rest, and moving on.

(RS):: Ok, last question: How fun was writing Wasted? The lines throughout are so good and quietly cutting, I love "wasted on heartache and tears." Anything else the world should know about The Delta Bell? Favourite writer? Favourite books, Color?

(KG): Ha, yes it was fun. I love playing it. I had part of the chorus knocking about for a while, and then the rest of it kind of tumbled out one evening. I think there’s that point when you’ve broken up with someone and you’ve done all the crying and drinking, and then you’re kind of left with this empty cynicism and just not wanting to have to bother thinking about it anymore. It was fun writing a song that was intended to be delivered so drily, and I always wanted to play it as if I couldn’t be bothered. That’s quite hard to do as it turns out, so it bounces a bit more than it did in my head! Favourite writers change a bit, but I always love Christopher Isherwood. He's a neutral observer, and I love that he lets you come to your own conclusions about characters. I also like it because I'm a bit of a history nerd, so I especially love the Berlin novels. My other 'release' this year is a chapter I've written on East German punk for a book on alternative music behind the Iron Curtain. So yeah, that's something you didn't know about The Delta Bell!

(RS) Thank You, Kate! I appreciate you taking the time to chat. I can't wait to hear more.

Posted by RiCK SAUNDERS at 1:57 AM

These posts are made in order to help promote artists that I love and believe in and to hopefully twist yr spindly little bird arm into buying their stuff. Generally speaking the artists that I tend to like are not wealthy and do not usually refer to their home (or tour van as the case may be) as a "crib". So with this in mind please give them your hard earned money. They deserve it or I would not bother letting you know about them. Songs are up for a limited time and once gone they are gone. Got the rights to a file and want it removed?
Give me a holler.

This is a Flickr badge showing public photos from ricksaunders. Make your own badge here.